Organic Food: Is it Worth It?

Contents hide
1 Should You Buy Organic Food?
1.1 Is Organic Food Worth It?
1.2 How does organic food actually benefit me?
1.2.1 Organic food has more vitamins and minerals
1.2.2 Organic food is less toxic than conventionally grown crops
1.2.3 Organic food tastes better! 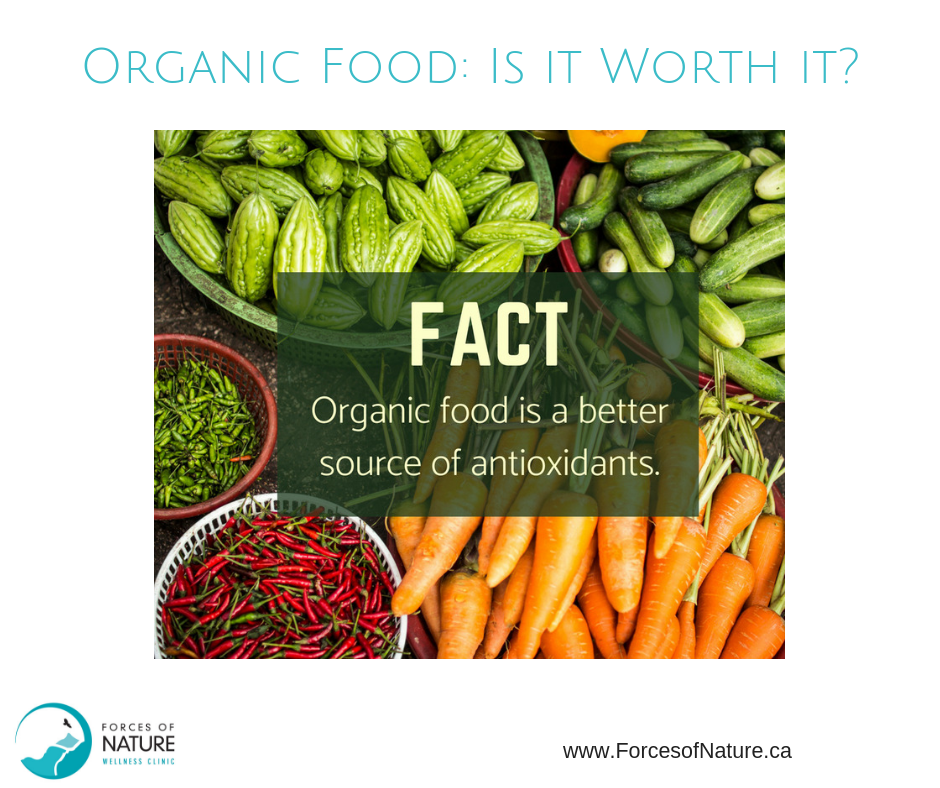 Should You Buy Organic Food?

How would you describe “organic food” in three words or less? Good for you? Expensive? Neither of these is a wrong answer.

You may often hear in vague terms about how organic food is good for you and good for the environment. But, if you walk into any grocery store you’ll see how organic food is priced significantly higher than conventional produce. Sometimes nearly double! Why is that? Although we want to do the right thing for our bodies and our planet, are the premium prices really worth it?

Unlike conventional farming, which uses synthetic fertilizers to boost crops with chemicals, organic foods are fertilized by organic matter. The difference is that compost and animal manure slowly nourish the soil. These organic fertilizers release their nutrients gradually over time, provide a wider range of minerals and in their naturally-occurring proportions. This slow and steady approach is much better for the soil, building it up rather than depleting its nutrients. Organic crops are also not sprayed with toxic pesticides and herbicides. Because of the lack of synthetic fertilizers, pesticides and herbicides, an organic crop will yield approximately 20% less produce than its non-organic counterpart.

Is Organic Food Worth It?

So what’s a healthy and eco-conscious consumer to do? Do you buy into the hype without really knowing if organic is better? Is the difference truly worth the extra cost?

According to a new study in Nature Plants, yes, it’s worth it!

Organic agriculture has been proven to be beneficial and sustainable in numerous key areas, including its ability to:

These are all great reasons to make a difference with your dollars by supporting the organic food movement. But chances are that you’re still wondering….

How does organic food actually benefit me?

In addition to those awesome antioxidants, one study also shows that organic foods have higher levels of iron, phosphorus, and magnesium than conventionally raised crops.

Meanwhile, remember those synthetic fertilizers we mentioned earlier? Well, they spur plant growth via high levels of nitrogen. The downside to this is that it causes conventionally grown crops to have higher levels of sugars and starches as opposed to the protective antioxidants found in organic foods.

So, which would you rather be eating – high antioxidants or high starch and sugar?

It’s something we all assume when we think of “organic,” but it’s good to know that there is scientific proof backing that assumption. A meta-analysis of 343 peer-reviewed studies conducted by the British Journal of Nutrition found that conventional crops have higher levels of the toxic, heavy metal cadmium as well as more pesticide residues.

Researchers have also found an increased cancer risk in children near California strawberry farms that use pesticides. And in recent news, the large agricultural corporation Monsanto, which manufactures glyphosate herbicides, just lost a lawsuit with a cancer patient – Dewayne Johnson. Mr. Johnson had regularly applied glyphosate weed killer on the school lawns that he maintained. The company now owes him 289 million dollars after internal company documents proved that Monsanto has known for decades that glyphosate could cause cancer. If the name glyphosate sounds familiar, it’s because there is speculation that people suffering from gluten intolerance, are in fact reacting to the glyphosate sprayed on gluten-containing crops. Stephanie Seneff is a senior research scientist at MIT. The following is an abstract from a paper co-authored by Dr. Seneff:

Celiac disease, and, more generally, gluten intolerance, is a growing problem worldwide, but especially in North America and Europe, where an estimated 5% of the population now suffers from it. Symptoms include nausea, diarrhea, skin rashes, macrocytic anemia and depression. It is a multi-factorial disease associated with numerous nutritional deficiencies as well as reproductive issues and increased risk for thyroid disease, kidney failure and cancer. Here, we propose that glyphosate is the most important causal factor in this epidemic. Fish exposed to glyphosate develop digestive problems that are reminiscent of celiac disease. Celiac disease is associated with imbalances in gut bacteria that can be fully explained by the known effects of glyphosate on gut bacteria. Characteristics of celiac disease point to impairment in many cytochrome P450 enzymes, which are involved with detoxifying environmental toxins, activating vitamin D3, catabolizing vitamin A, and maintaining bile acid production and sulfate supplies to the gut. Glyphosate is known to inhibit cytochrome P450 enzymes. Deficiencies in iron, cobalt, molybdenum, copper and other rare metals associated with celiac disease can be attributed to glyphosate’s strong ability to chelate these elements. Deficiencies in tryptophan, tyrosine, methionine and selenomethionine associated with Celiac disease match glyphosate’s known depletion of these amino acids. Celiac disease patients have an increased risk of non-Hodgkin’s lymphoma, which has also been implicated in glyphosate exposure. Reproductive issues that are associated with Celiac disease, such as infertility, miscarriages, and birth defects, can also be explained by glyphosate. Glyphosate residues in wheat and other crops are likely increasing recently due to the growing practice of crop desiccation just prior to the harvest. We argue that the practice of “ripening” sugar cane with glyphosate may explain the recent surge in kidney failure among agricultural workers in Central America.

To learn more about which crops you should always buy organic based on pesticide levels, there is a great resource created annually by the Environmental Working Group or EWG. They are a nonprofit organization that advocates for policies that protect global and individual health. The EWG’s “Shopper’s Guide to Pesticides in Produce” ranks the pesticides levels in 47 different fruits and vegetables. Their annual list of the Dirty Dozen contains the 12 most heavily contaminated types of produce. These are fruits and vegetables that you should either abstain from eating or only consume if they are organic. Talk about leaving a bad taste in your mouth! Speaking of which…

At some point in your life, you’ve likely compared strawberries from the grocer to those fresh from the garden or picked in the wild. Even without considering that toxic tidbit above, which would you honestly say tasted better? Odds are it was the berry from the garden.

When plants are grown without pesticides, their flavour is naturally improved. The higher antioxidant levels found in organic foods also impacts how we detect flavour through organoleptic qualities such as taste, aroma, and mouth-feel. Plus, organic foods carry the distinct flavours of a region’s soil, which further enhances their natural taste. Organic berries just plain taste sweeter!

When we look at the long-term effect of toxins in our system, we see an increase in autoimmune disease, hormonal imbalances, and nutrient deficiencies that lead to more significant health issues. In Naturopathic Medicine we seek to remove the factors preventing the body from healing itself, in other words, remove the obstacles to cure. In most cases that includes avoiding toxic intake, while also enhancing the body’s own ability to eliminate toxins. The more we know about how pesticides and other chemicals harm us, the more we can stay away from things that are not serving our longevity, our health and the health of our families.

They say you get what you pay for, and that statement holds true with organic foods. Buying organic might cost a bit more, but consider it an investment in improved health, greater flavour, and a more sustainable environment.

Maybe you can’t afford to buy all organic all the time – most people can’t. But that doesn’t mean it needs to be all or nothing. Throw a few organic items into your cart now and then, or better still, make friends with the farmers at your local market. As with anything in life, small actions add up to make a real difference.

So our conclusion is an enthusiastic “yes, organic food is worth it!”

If you have any other questions about nutrition, natural ways to improve your health, how to detoxify from environmental pollutants or anything else, please feel free to contact our Naturopathic Doctors or our Registered Dietitian. We would be happy to help. Just give us a call at 416-481-0222 or email Info@ForcesofNature.ca. We would love to hear from you.

Authored by Dr Pamela Frank, BSc(Hons), ND for The Team at Forces of Nature