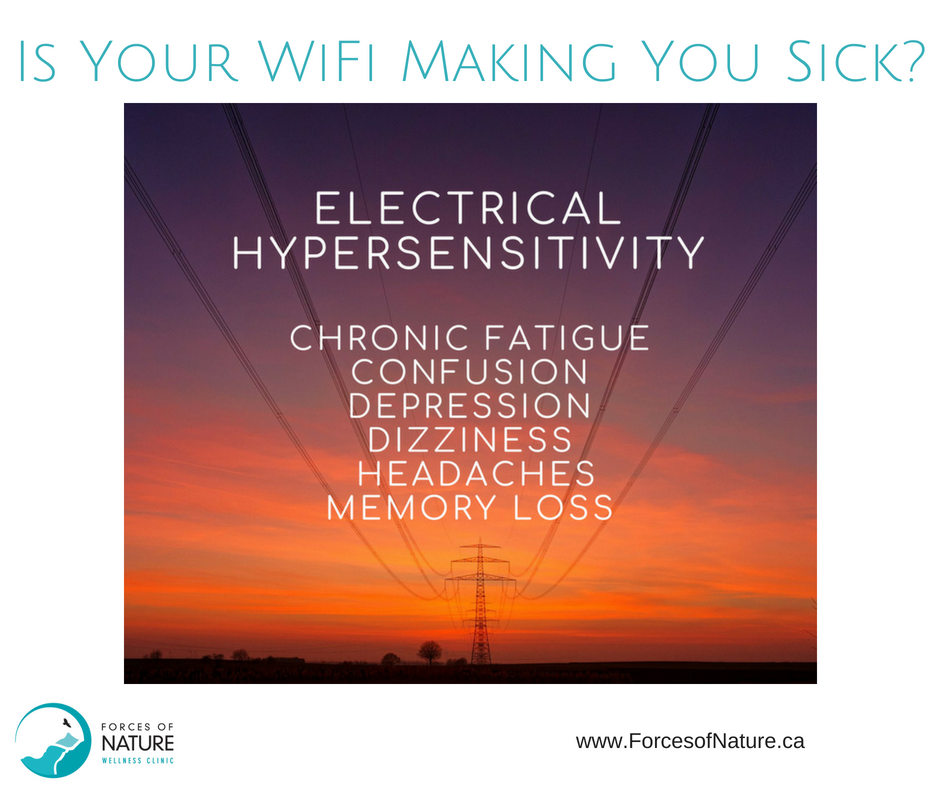 Can Your WiFi Really Make You Sick?

Our health is directly affected by a variety of things we cannot see but we know to exist. We don’t see the air, but oxygen is essential to human life. We cannot see UV rays, but we can certainly feel their effects when we get a sunburn. While we cannot see electromagnetic radiation (EMR) or electromagnetic fields (EMF), a growing number of people are reporting symptoms that appear to be caused by electrical hypersensitivity (EHS). Much like how pollen doesn’t cause everyone to have allergy symptoms, EMR doesn’t cause everyone to have EHS. And like how some individuals will have intense seasonal allergies while others won’t, some will have severe EHS symptoms, while others won’t. Data suggests that about 3% of the population are sensitive to EMR. What makes these people more sensitive to EMR? That’s a good question.

Over the last 20 years, physicians with the American Academy of Environmental Medicine have been seeing patients whose symptoms appeared to be triggered by “dirty electricity”. The term dirty electricity refers to the electromagnetic energy flowing along a conductor that deviates from a pure 50/60 Hertz sine wave and has both harmonic and transient properties. It is more correctly termed high-frequency voltage transients (HFVT). Electromagnetic radiation may come from power lines, televisions, computers, and other electrical devices. The health impact of dirty electricity was first discovered in the 1950’s. In rural areas, the behaviour and feeding patterns of animals were negatively affected by stray voltage caused by poor grounding and lack of utility infrastructure.

Humans suffering from EHS might experience symptoms such as headaches, dizziness, chronic fatigue, depression, memory loss and confusion.
Now, more than ever, we are living in a world of luxuries that depend heavily on electricity and have the potential to generate electrical pollutants. We have phones in our pockets, microwaves in our kitchens, and satellite systems in our cars. As science attempts to keep up with the exponential increase in the use of technology, we are only beginning to comprehend the effects that RF waves may have on our health.

What is Radiofrequency Radiation?

Radiofrequency waves are what allow you to borrow your neighbour’s WiFi while you’re waiting for the service guy to come. Without the need for wires, RF has the power to pass through walls and go just about anywhere, that includes inside our body. In this digital age, many items that we rely upon can be a source of radiofrequency radiation. Our cell phones might seem obvious, but what about our Smart Meters, our children’s gaming systems, the baby monitor and cordless phones? They all use wireless communication, surrounding us in a constant invisible fog of electrosmog.

According to NASA: “As you sit watching TV, not only are there visible light waves from the TV striking your eyes, but also radio waves, transmitting from a nearby station, and microwaves carrying cellphone calls and text messages, and waves from your neighbor’s WiFi, and GPS units in the cars driving by. There is a chaos of waves from all across the spectrum passing through your room right now.”

As a society, we are pressured to keep up or fall behind. Have you ever passed the Apple store the day a new iPhone hits the market? So many of us are willing to stand in lengthy lines, just to be early adopters of the latest technology. Our priorities are placed on technology as a way to make our lives better. And no doubt, it does in some ways. However, most of us don’t consider how our attachment to technology also impacts our health by inundating our bodies with a constant barrage of radio frequencies.

While EMR and RF radiation is considered biologically safe according to safety data provided by Health Canada and other organizations, the reality is that the level of our constant low-grade exposure is not reflected in their guidelines.

Some scientists have been researching the impacts of electrosmog on our bodies long before our world became so highly digitized. In 1987, one study proved that exposure to electrosmog (at levels considerably lower than those observed in urban areas today) created changes in human brain waves and behaviour. Further to that, EMR may also affect our mitochondria. These are our cellular energy factories. They are fundamental to every energy-dependent process in our body, including the function of our nervous system. As a result, EMR-induced disruption of our mitochondria may effectively bolster neurodegenerative diseases like Alzheimer’s and Parkinson’s. As well EMR may be playing a part in other diseases and health issues where mitochondrial dysfunction is implicated. These include psychiatric disorders, autoimmune diseases, headaches and migraines, chronic fatigue syndrome, fibromyalgia, stroke, diabetes, heart disease, reproductive disorders… the list goes on and on!

So, the question needs asking: If EMR and RF are already having an impact on our health, what are the long-term effects for our children raised in a world choked by electrosmog? Only time will tell.

How to Minimize Your EMR & RF Exposure

While more data is required, the science that’s already in, warrants taking precautionary measures in minimizing EMR exposure, particularly if you are suffering from EHS symptoms.

5 Steps to Protect Yourself from EMF:

If you believe you have symptoms that could be related to electrical hypersensitivity or any other health issues, please book an appointment to visit us at Forces of Nature. We want to help you take control of your health! Call or email us at 416-481-0222 or email Maria@ForcesofNature.ca